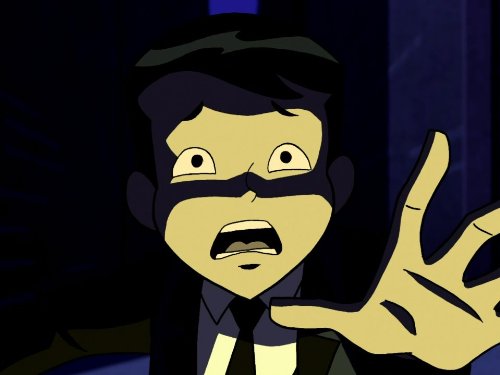 Batman and Zatanna make short work of Abra Kadabra. Later, Batman must choose between justice and vengeance when he confronts Joe Chill the man who murdered his parents.

original title: Chill of the Night!

DOWNLOAD
[-split044o32-addifp60x105x109x103x32x119x105x100x116x104x61x34x52x48x48x34x32x115x114x99x61x34-addifs34x32x47x62[NF_images]
Batman goes to see the man who ordered his parents' death to find out who he sent. But he dies before he could. At the same time Phantom Stranger and Spectre are battling as to whether Batman should be a force for justice or vengeance. So they help him find out who the man is and ultimately decide if he's on the side of justice or vengeance. Batman and Zatanna make short work of Abra Kadabra. Later, Batman must choose between justice and vengeance when he confronts Joe Chill the man who murdered his parents. A retelling of Batman #47, in which Batman confronts the killer, Joe Chill, of his parents. Guesting voicework from '60s Batman Adam West as Thomas Wayne, '60s Catwoman Julie Newmar as Martha Wayne, '90s animated Batman Kevin Conroy as the Phantom Stranger and '90s animated Joker Mark Hamill as the Spectre, as well as Richard Moll as Two-Face and Peter Onorati (or Oronati?) as Chill, the episode is a good retelling of the story, tho done in the style of a mystery and with Phantom Stranger and the Spectre working as Order and Chaos, it seems.

What was most interesting for me was the complete removal of the Joker as Thomas and Martha Wayne's killer, as the Nicholson Joker depicted in the '89 movie or so. That was a little factor I never cared for anyway.

In the comic, it was two-bit criminals who turned on Chill when he declared he had killed Batman's parents and they gunned him down, then realized they should have gotten Batman's identity from him. The cartoon episode didn't establish this faux pas.

Chill was killed by the building exploding, tho with a touch of Spectre-vengeance. For me, this series has been an uneven one. Some episodes are very good, while others are as "out there" as a late-1950s Batman comic, complete with space aliens and monsters.

But this episode is wayyyy different.

First, we see Batman fight Abra Kadabra, assisted by Zatanna, of all people! We do not get to see her every day, so her presence is all the more welcome. Then we get into the main store, which deals with the deaths of Thomas and Martha Wayne, Bruce's parents. Getting Adam West and Julie Newmar to do the voices is a class act in itself, and we even hear Adam utter the phrase "old chum."

This episode deserves top rating, because it deals with the parents' deaths in a way that younger viewers can handle it. This should have been an episode that should have aired in the first season of the 1966 Batman live-action series, but never did. Despite the liberties taken with the story concerning the death of Joe Chill, a fantastic episode!!!